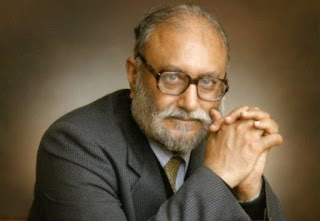 Dr. Abdus Salam was an interesting man. He was a world renowned scientist and a Nobel Prize winner.
He was born in Pakistan and educated in the UK, but he always remained true to his roots.

He attained a Nobel Prize in Physics in 1979. He worked on the theory of unification of the four fundamental forces, and his work had a major impact on the development of physics in the 20th century.

Dr. Abdus Salam was often asked about his views on Islam and science. In one famous incident, a reporter asked him whether he thought that Islam was compatible with science. Dr. Salam replied, "Yes, of course. Islam is the religion of peace and knowledge."

Following are some of his insightful quotes:

“From time immemorial, man has desired to comprehend the complexity of nature in terms of as few elementary concepts as possible.”

“I have spent my life working on two problems. First to discover the basic building blocks of matter. Of the two passions of my life the second has been to stress the importance of science transfer for developing countries.”

“I believe that the rise of a great poet or a great writer or a great humanist in any Civilization is not an isolated incident – that it is always accompanied by an equally significant emergence of men as great in science and philosophy.”

“The excellence in sciences is dependent on the freedom and openness within the scientific community in any society (assuming that such a community is large enough) and not necessarily on the openness or democracy within the society at large.”

“God said, let there be light; to make light and to perceive it, He made protons and Electrons – the two fundamental particles of physics.”

“I would have liked to show you that with all his pragmatism, the modern physicist possesses at once the attributes of a mystic as well as the sensitivity of an artist.”

“There is no conflict between the study of nature, and the study of Islam. A study of these natural laws, and seeing how they operate is a form of prayer and gratitude To Allah.”

“Whenever faced with two rival theories for the same set of phenomena, one has Always found that a theory more aesthetically satisfying is also the correct one.”

“I would have liked to show you that with all his pragmatism, the modern physicist possesses at once the attributes of a mystic as well as the sensitivity of an artist.”